An Interview with Steven Sawtelle II of Sawtelle Cigars

An Interview with Steven Sawtelle II 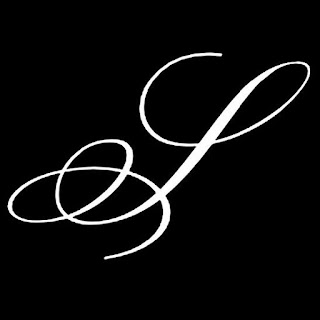 I recently sat down with Steven Sawtelle II of Sawtelle Cigars for a phone interview on his new cigar company and his first cigar release, The Inkwell. I took advantage of this time to actually smoke and review The Inkwell while talking with Steven, as well as getting his input on what went into creating his first release and what he was trying to accomplish. We started out our conversation with me asking him some of those standard questions. What is the wrapper? What is the binder? What is in the filler? Well, he wouldn’t tell me. You see, Sawtelle Cigars doesn’t want to be a cookie cutter cigar company.
They don’t have a problem with doing things the way they want, win, lose or fail. That goes right to the heart of the company slogan. You will notice on their website or when they tweet, they include the #nevercompromiseyourtaste hashtag. This is directly related to everything they do. Never compromise the way you do things. Never compromise your standard. Never compromise the flavor profile you are trying to achieve when creating your first cigar. Well, that was a mouthful, but I needed a segway.
Sawtelle Cigars had an idea on what they wanted in their first cigar release.  They had very specific ideas and they were not going to compromise. And I’ll tell you, it paid off. We discussed the vitola currently offered, a torpedo box-press, and if they would offer The Inkwell in other vitolas. Steven explained to me that they had a very specific idea of what they wanted. They were not interested in doing what everyone else does. He feels that by getting something right in one vitola was more important that risking a compromise on flavor or character by offering other vitolas and therefor, they decided to stay with the one vitola. Now, that being said, he let me in on a little secret. In their testing there may or may not be around 50 Toro vitolas that may or may not be given out to friends, special deals or given all to me. (Just kidding!) 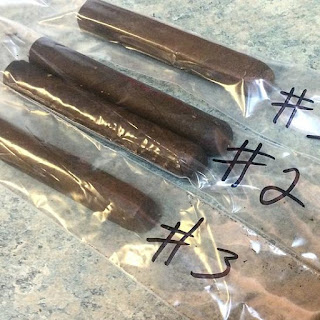 Stevens’s dedication in not compromising his or your taste has led to this new cigar. As I look it over, I notice several things. First is the oily wrapper and the fantastic construction. This torpedo box-pressed cigar is well constructed, with tight seems and little veins threw out. The Inkwell is made in a partnership with HaVe Cigars out of New Mexico. There, these gems are created and produced. During the blending process, Steven was sent sample after sample, all with the flavor profile in mind that Steven had laid out. Samples were sent to Steven with numbers attached to identify the blend. Once the right blend was discovered that did not compromise his taste, Steven gave the approval for the blend we know now as The Inkwell. 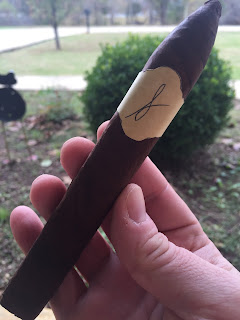 Keeping that process in mind, when you look on the website you will find pictures. Pictures of cigars tested or rejected, or maybe a hint of things to come. We will get to that a bit down the road. Moving on with my review of The inkwell, the wrapper aroma is fantastic. I pick up hints of woodiness, accompanied by hay and a light sweetness that I am calling molasses. It’s a very intriguing aroma and it makes me anxious to move forward. As I take in the aromas of the foot I note that the hay has actually taken on a dominate position. This leaving a background of barnyard aroma.

During our talk I asked Steven about being first introduced to cigars. He told me about a time when he was freshman at Berry College in Rome, GA. He started hanging around a cigar shop, where he admitted his infant--like knowledge of cigars. The guys there where very helpful and, as Steven started asking questions, the answers started coming. He learned how to cut a cigar and all the ways to recognizing the flavor profiles he was tasting. Soon after that, Steven started doing some armature cigar reviews while still asking questions to help broaden his cigar knowledge.

As I continue on with my cigar in hand, I make my cut and move forward with a cold draw. The very first thing that stands out is the buttery flavor and the creamy texture. There are subtle hints of leather and woodiness also. I admit this is not what I had pictured in my head this cigar was going to be. However, I am not disappointed. The buttery flavor is a pleasant surprise. Along with a creamy texture is a woody base, and I am excited to move forward.

When Steven and I first started talking, we found out that we had something in common. You see, when I was about eleven, I lived in a small town in Wyoming called Riverton. It wasn’t long into our conversations I discover that Steven actually lives in Riverton, Wyoming today! Small world. This got me thinking though. How does a guy in a state that is not known for Tabaco production, manufacturing or a cigar industry just up and start a cigar company? Well, as we previously discussed, Sawtelle Cigars has partnered up with HaVe Cigars. This is where a guy from Wyoming can start a cigar company. HaVe Cigars helps out with blending and production and leaves other aspects to Steven that doesn’t require a presence “in the field”.

One of the first things you will notice about The Inkwell is the band. The band is a small piece of parchment paper that Steven personally signs each band with calligraphy “S”. EACH BAND! Every one! I asked Steven, why? He went on to explain to me that The Inkwell is personal, like a letter. When you write a letter, you are writing a personal message to someone. By signing each band, he is sending something personal from him to you. It’s intimate and close. Sawtelle Cigars is a small fish in a big pond and that’s ok with them. Being a “mom and pop” operation is something that appeals to him. You are able to be personal and have relationships with the people you come in contact with. As I watched the day-one release of The Inkwell, I saw Steven reach out--almost order by order-and thank people one by one as their orders were placing. Amazing!

Speaking of amazing, it’s time to light this cigar. As I take my first few puffs, I note a fuller strength. This is accompanied with the beginning flavor profile. A woodiness, oak, followed by leather and the buttery taste that I am starting to really enjoy. There is a wonderful creamy texture, and I take note of a very even burn. The ash is a variety of shades of gray. Light gray, medium gray and dark gray all mix together and make for a beautiful ash. 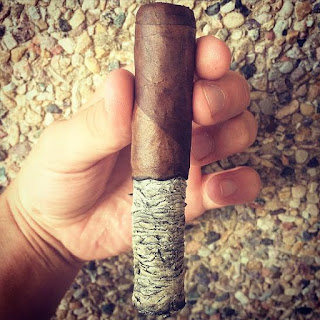 Steven and I continue our conversation, and he talks with me a about a flavor evolution. When I said earlier about him having a certain flavor profile in mind, this is what he was getting at. You see, he wants there to be a complexity in his cigars that reflect a flavor evolution. As I began smoking The Inkwell, I am starting to get flavors that are not by chance. Steven knew what he wanted. At the beginning, we are getting a set of flavors and, here in a minute, we are going to see what happens. Something tells me we are going to see a change.

As I move into the second third of The Inkwell, I take note of the strength mellowing out to medium. There is a smoothness here that I am enjoying. The oak has taken a backseat and a breadiness has taken over. That with the buttery flavor, along with a sweetness that I can only describe as a banana/molasses flavoring, make this very interesting. There is still a hint of leather in the background that helps make this third a meatier third. The smoke and aroma are very pleasant and I am in a relaxed state of enjoyment.

I touched earlier on about some pictures on Sawtelle Cigars website. There is one of a sun grown stick. That, along with others, had me asking Steven if this was some sort of teaser. I was surprised to get a resounding “YES”. He went on to tell me that there are other releases in the works. A plan to release two more lines before--wait for it--they release a Limited Edition cigar. Now, when I say limited edition I mean limited edition. Steven said that he plans on only releasing 1,000 sticks at most. Now, that is limited. That, along with the 50 Inkwell Toros that he is going to give me (just kidding), will make for some very desirable cigars. And he plans to do all this without compromising their taste or the way they do things.

Moving into the final third of this stick, I am hit with something much unexpected. A very clean cedar, along with the butteriness that has stayed with the cigar all the way through. However, the surprise is the texture of what I am calling cheesecake. There is a thick, dessert feeling here that can’t be ignored. As a matter of fact, it is very enjoyable. This last third has a dessert quality to it.

While searching through blend after blend, Steven told me that some of the things he was looking for and not willing to compromise on where the consistency, complexity and that the construction was a must. I must say that he has accomplished his goals. The Inkwell has something for everyone. It’s a complex cigar that has a very good base flavor profile that evolves throughout the experience. The construction, flavors, complexity, aromas and experience are all brought together in this stick, and it is something to be proud of. Sawtelle Cigars should be proud to have this as their first release.

As I wrap this up, I will say that Sawtelle Cigars is doing something really special over there. From taking pride in their product and what to the personal treatment you get. I want to thank Steven for taking the time to talk with me about their new boutique cigar company, what they have accomplished, and where they are going. I highly recommend everyone try The Inkwell and see what special things are going on at Sawtelle Cigars.